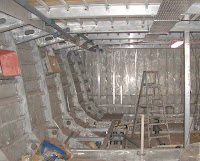 So you have the contract well defined. You’ve defined the scope of work. You’ve agreed upon and set the project schedule. You’ve determined and contracted a price for the work, and defined milestones for the project. In other words, you’ve got it all covered, right?
Well, no. Not yet, anyway. If you haven’t dealt contractually with emergent work and change orders, you’ve left a hole in your agreement big enough to drive a superyacht through.
A change order, which is really a modification to an existing contract, becomes necessary when the buyer wants a change to, or deviation from the originally agreed upon scope of work, or to the originally agreed upon specification. Change orders become an issue particularly when you are dealing with a firm fixed price contract, since such contracted pricing only extends to the already agreed upon scope of work and specification.
Emergent work generally crops up during major refits. It is comprised of work that comes to light after the originally contracted work begins, and almost always was not visible or discernible before that originally contracted work began. Emergent work always occasions a change order.
A well-known maxim in the residential and commercial construction sectors is, “Low ball ‘em on the price, then kill ‘em on the change orders.”  A similar approach can often be found both in yacht new build and refit.  If a buyer/owner is not protected in the initial contract with respect to potential change orders, they can later become a de facto opportunity for the yard to rewrite the original contract. Consequently, among the key questions to settle ahead of time in any contract are:
Keep in mind that, even if these questions are settled and provided for in the original contract, emergent work and change orders put the buyer/owner at a disadvantage. When the original contract and price are negotiated, the shipyard is generally at a competitive disadvantage. That is, they are (or could be) bidding against another yard or yards. So the pressure is on them to price as leanly as they can, in order to assure that they get the work.
But once a new build or major refit has begun, it is not generally practical, costwise or otherwise, for the project to be moved to another shipyard. So the competitive incentive is lost for the yard to keep the pricing on change orders as lean as for the original scope of work. As a result, the cost of emergent work and change orders can, at times, mount up sufficiently to rival that of the originally planned cost. The only way to avoid this is to minimize, to as great a degree as possible, emergent work and change orders. And in cases where that is not possible, to have procedures defined in the original contract to govern the pricing and scheduling of such additional work when it arises in the course of a project.
Next post will talk about how to structure safeguards concerning emergent work and change orders.
by PHIL FRIEDMAN