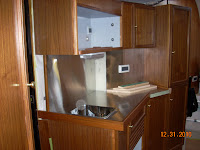 The “scope of work” defines what work and materials are, and what work and materials are not included for the agreed price. The “SOW” is the foundation upon which all other aspects of a new build or refit contract are built. “Duh, sounds pretty simple to me,” you may think. However, it is more complex than it might appear at first glance. For example, the SOW listed in a refit contract might explicitly include engine replacement, but overlook tasks related to engine beds, mounts, shafting, and couplings.

Rarely, if ever does a new build or major refit contract spell out every detail of the included work. That is because to do so would require weeks, if not months of costly effort, just to get to a contract. So many yards and yacht vessel owners rely on the concept of “customary industry practice.” Unfortunately, in many cases, that is little more than an invitation to eventual arbitration or litigation.

From the yard’s perspective, it is significantly better to include an omnibus exclusionary clause that says, “Whatever is nor specifically included, is excluded.” In other words, if it’s not on the list, it’s not included in the SOW.

From an owner’s perspective, the right move is to include an omnibus inclusionary clause that says, “Whatever is customarily prerequisite to accomplishing the listed work, and not specifically excluded, is included.” Which means, for example, if the engine replacement requires modification to the engine mounts and/or bearers, and these tasks are not specifically excluded in the SOW, they are included for the agreed price.

Naturally, yard and vessel owner may disagree about which form of omnibus clause is to be made part of the contract. But attention to this issue forces all involved to think carefully about the SOW before the deal is finalized, and thereby tends to avoid disputes later over charges that accrue to tasks not specifically listed in the contract.